James Cook (1728–1779) was born at Merton, Yorkshire, England and grew up on a farm at Ayton. In 1747 he moved to Whitby and joined the merchant navy, working on colliers and other ships in the coastal trade and later the Baltic Sea. In 1755 he joined the Royal Navy and two years later qualified as a master.

He served in North America during the seven years’ war, taking part in the capture of Louisburg and Quebec. As master of HMS Grenville he spent five years surveying the coast of Newfoundland. He married Elizabeth Batts in 1762, with whom he had 6 children. 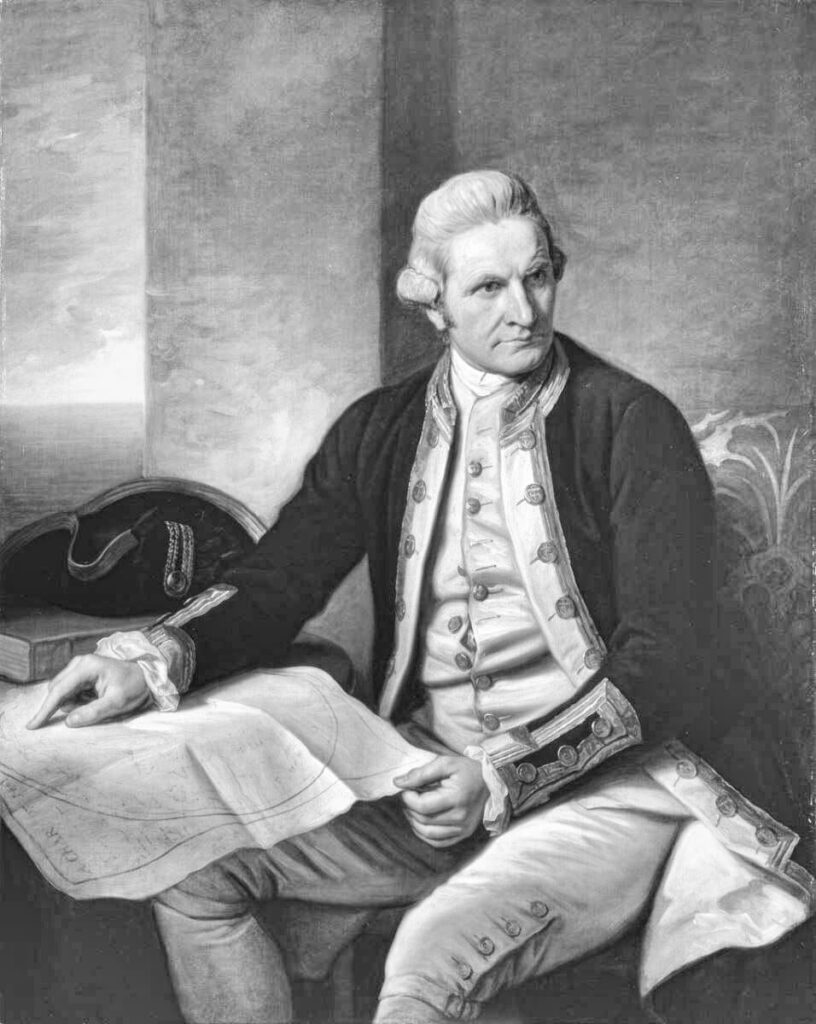 In his first 13 years at sea Cook had become a competent navigator and surveyor.

His astronomical observation and surveying skills brought him to the attention of the Royal Society, who were sponsoring an expedition in 1768 to observe the transit of Venus in Tahiti and explore the South Pacific. Cook had become a fellow of the Royal Society by then, promoted from Master to Lieutenant and given command of HMS Endeavour for the voyage.

The Endeavour was built by Thomas Fishburn of Whitby, and launched in June 1764. Her original purpose was as a collier for the coastal coal trade. A barque weighing 366 tons and only 30m long, her maximum speed was eight knots.

On 26 May 1768, she was commissioned by the British Royal Navy and fitted out especially for the three-year expedition. She carried a yawl, a pinnace, a longboat and two skiffs. Her armaments included 10 four pounders and 12 swivel guns.

At departure, the crew of 94 consisted of 71 ship’s company, 12 marines and 11 civilians. Several died during the mission.

Supernumerary passengers included Joseph Banks (born 1744 at Revesby Abbey, Lincolnshire) as official botanist, who funded the participation of seven other people consisting of two naturalists, an astronomer and his servant, two artists, two servants from his Revesby estate and two black servants. Seven of Banks’ complement would die on the voyage.

error: Sorry, our images are protected.